- Indicates HD Radio signal was received but did not lock.

- Will appear if this station has locked in HD and picture of RDS was taken.

*Confirmed via phone with Van Stuber in Flagstaff
** - Was broadcasting an Eastern Arizona basketball game (as evident in clip). Called and confirmed with studio guy what he was saying in the clip. Prior to recording, several mentions of Yuma were heard.

*- Confirmed by both brief ID and direction of radio, plus nulling of KFAQ.
** - KIXW was likely stuck on day power during reception.

***-WJR was confirmed due to programming. It was playing Dr. Laura at 9PM MST and according to their schedule, was the only affiliate of hers playing the show at that time. This is the only possibile station on 760 with Dr. Laura at that time. Heard underneith KKZN from Thorton, CO and KFMB from San Diego. Dr. Laura's trademark voice and opening was what I heard.

*KCMO is one of the only affiliates on 710 that airs "Art Bell - Somewhere in Time". This is how I confirmed the station.

*Station was received from Rawlins, WY to Rock Springs (15 miles east of Green River), from about 3 PM to nearly 4 PM. The sun set and it disappeared in the mess.

*KRZI was heard on high power, due to the sun being up in CDT, but not in MDT at time of reception. Mentions of Waco were heard.

** - Note, the recording of CKBF2 is roughly 5 minutes long and also about 5.4 mb in size. The recording shows the directional signal fading toward the end.

*- Station listed as operating under day power only by FCC, but clearly is operating at night, with an unknown amount of power, most likely 10kw. Frequent IDs, clearly saying Equis (X) eh (E) Day (D). 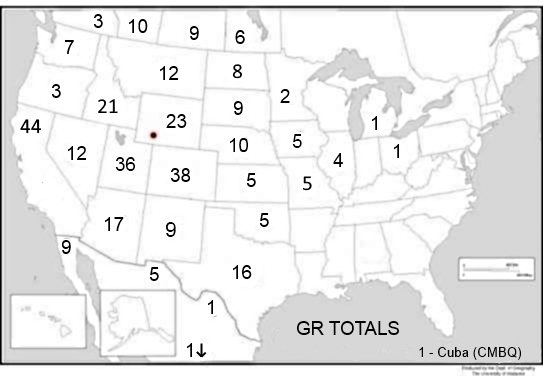 TOTAL NUMBERS (UPDATED AFTER EVERY DX)

W???- East of the Mississippi

- Coast to Coast AM Affiliate

New Stations are marked with

Sony XDR-F1HD - HD Tuner with extreme sensitivity and selectivity. Primarily used for FM DXing as it is not portable like the Grundig. Quite possibly the best radio ever.

Grundig G8 Traveller II - A nice portable with great reception. Post 2014 receptions were likely made on this unit.

Panasonic Boom Box (No longer in use, in GR Landfill :< )

Grundig FR200 - Radio with AM/FM/SW and wind up power. No longer used.

*** - UBSTUDIOS Pledges that no advertisements will ever appear in popup form on this or any other www.ubstudios.com site. We do not condone popup advertisement and it is the main reason we moved to a new domain in the first place. Angelfire was horrible about advertisements, we will never do this. If you do receive a popup while surfing this site, you may have spyware on your computer. We recommend downloading a free copy of Adaware SE. This link will take you to download.com an outside source. We are not responsible for the content of outside links.