The observatory I want my own custom built one modeled after in the hopefully near future. This page also contains neat views of objects in the sky as seen through the telescope(s) the guy has. 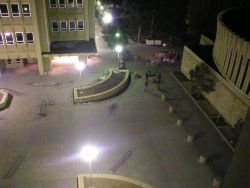 Picture taken from the Physical Sciences Roof with a very wide open iris (longer exposure.) Look at the guy walking toward the classroom building, he looks like a ghost. This was taken at the required observing lab 3/6/05. We were able to look at a few cool objects while we were there. We mostly were able to see Saturn, the Orion Nebula (on the main astronomy page), the Pleadies, and a few other stars out at the time including Sirius. I must say, this is what inspired me to want to build my own telescope dome (the link above takes you to the one I would like to have) and further my interest in astronomy. I'm not saying this to be a kiss-ass, I'm saying it because I've always thought of Astronomy as one of my hobbies. I also plan on minoring in Astronomy if I have enough time. This page was also inspired by the Astronomy 1050 class I am taking right now.

Astronomy picture of the day.

SETI @ Home -The Search for Extra Terrestrial  Intelligence on your computer.

Contains a kick ass space simulator called Frontier: First Encounters. Instructions on how to download and install it are on this site. This game is shareware.

Back to the Astronomy main page.

This site was built to be viewed with a resolution higher than 800X600.

We fully support and endorse both Mozilla Firefox and it's counter part Thunderbird.

This site looks good in either Firefox or IE6.