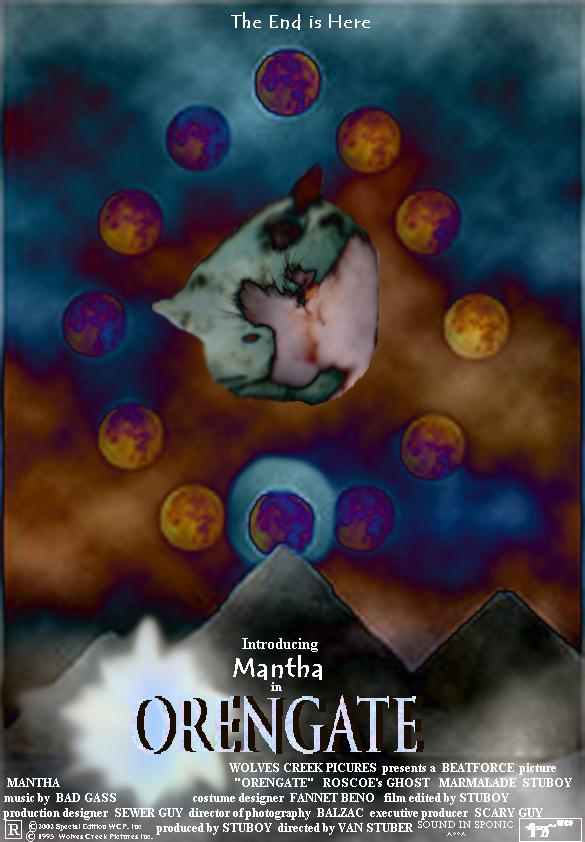 This film was made right before Ahguy Impossible (which is not on the main page). Its a cool movie like stargate where a gate with different markings makes a worm hole to another dimension. Starring Mantha. Mantha travels to a land through the orengate where cats are constantly tortured and slaves of the Gods. Mantha is troubled by what she sees and fights to free the slaves but eventually gets captured by one of the Gods and beaten and enslaved like the other cats. Mantha plots to over-throw the Gods empire but first she must figure a way to get back to the cat homeworld back through the Orengate. While tricking one of the Gods by playing dead, she escapes and manages to free some cats before the Gods find out and begin a super chase scene over sand dunes. The special effects of the Gods flying vehicles are so awesome, you can even see the strings pulling them along. Once Mantha finds a way back to the porthole a Dorky time warp scene happens and Mantha with some other cats emerge from the porthole without any fur. Some crappy claymation used along with the worst special effects and acting ever, just like the movie Stargate. This movie is also part of the Mantha Beat Series where all the movies are connected. Also the Special addition of Orengate is coming out this summer along with a new poster.

The DVD will contain the directors butt in widescreen along with some out-takes and how they did the crappy special effects. It also contains dumb comments from the cast and crew and a Mantha Beating Training School special.

The Mantha Beat movie series consist of: (in chronological order)

Beating Mantha......Available on DVD and VHS.

Escape From the Gods..... VHS, DVD in production!

Attack of the Manthas...VHS and DVD soon.

Planet of the Cats....DVD only, soon!

After what happened in the first Orengate movie, Mantha needs a rest and travels to Marmus for some Rest and Relaxation. But little does she know that her co-worker at the Stugate labs is messing around with the strange time/space warp Orengate found in the desert. Marmalade unintentionally activates the gate and is transported to the time and land of the Torture Gods. Mantha quickly comes back and since she was the only Mantha to survive the first film, she has to travel into the Orengate to save her Stu co-worker. Once there she is captured by the main Torture God Beatus (Magnon) and taken to the Palace of Beat. There she realizes that Marmalade is trapped along with other cats who are the gods slaves. Soon Mantha leads an escape mission from the palace and tries to find a way back to the Orengate porthole. Along the way she runs into many torture gods who do nothing but BEAT. It's up to Mantha to save Marmalade and the other slave cats. She must transport them back to her time before the microwave at the lab explodes and destroys the Orengate which would leave Mantha and the others trapped in the Beat world. Rated R for extreme Mantha Beating scenes and a dorky sword fight between Cro Magnon and Sewer Guy. Copyright 2001 WCP