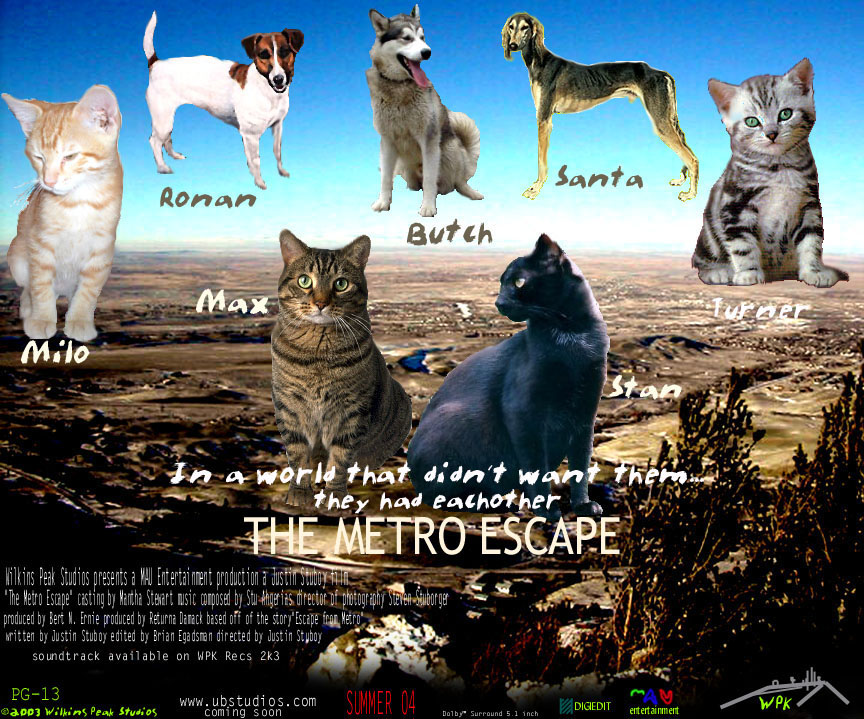 Ever seen Disney's The Incredible Journey? In that story, two dogs and a cat travel hundreds of miles to reach their original house after being abandoned. In Escape From Metro, 4 cats and 3 dogs escape from an animal shelter north of Casper Wyoming known to the people as Metro. What makes Metro animal shelter so evil is the fact that it is a "kill" shelter, unlike the humaine society shelters. Anyway, the cats and dogs have been sick of seeing their fellow cell mates dissappear one by one, so they escape. The film follows the animals from their journey to the Events Center all the way until the climax. Heart pounding suspense builds as the staff at Metro realizes what has happened and begins to hunt them down. Warning for animal lovers... the opening of this film is fairly graphic, and may not be suitable for some. Don't worry; as always all animal action was monitored strictly by the humaine society of whom this movie supports. No animals were harmed during the making of this feature. This is partially based on a true story that happened in some time between 1992-1995. The original story was written by Justin Stuboy. Rated PG-13 for a graphic opening and comedy gestures. Color 2003 Wilkins Peak Productions. This film is not animated.

Viewed by Freddie Farz Jr.
Overall I was pleased with this film. It was amazing how they trained the animals for this. The story is pretty cool too, but some, if not all of it is fiction and impossible. Who cares about that though. The movie itself is a combination of several genres. It has comedy, drama, suspense and tragedy. I wouldn't doubt that when this movie hopefully hits theaters some 10-20 years from now when Director/Writer Justin Stuboy hits the big time, it will be one of his most controversial films of his career. Like some others who've seen it, I'd have to agree, wtf is up with that place? Sounds like animal cruelty to me, and I'm not talking about how it is a kill shelter. This movie brings to life what really is happening and its too bad I can't tell you the story (mostly the beginning) because it would piss you readers off as much as it did me. Especially, the beginning. 4 stars deffinately!