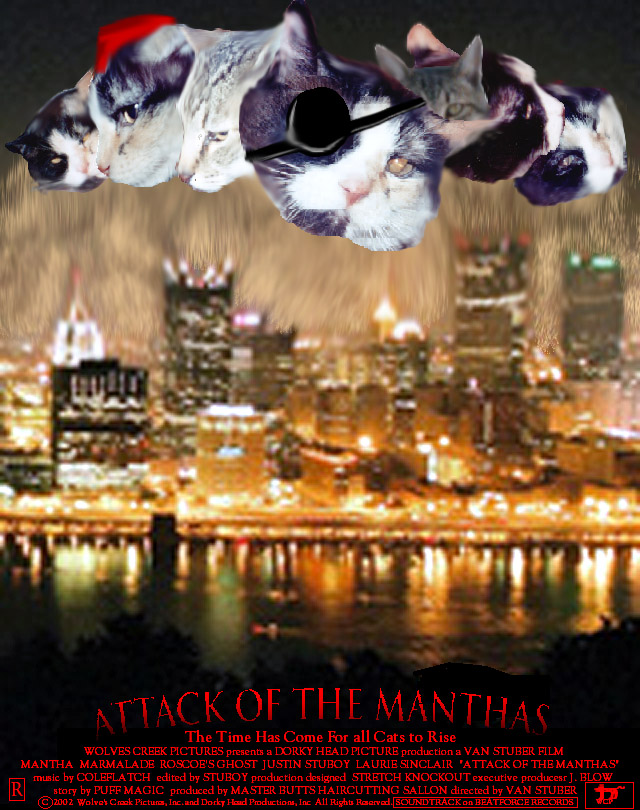 Part of the Mantha Beat series, the Cats of the world have had enough of the beat and organizing secret meetings under the humans noses. Led by a brave cat named Mantha, the cats plan to attack their human masters (Gods) and eat all of them before the Biggest Beatfest in history takes place on the 4th of July. Mantha leads the cats in an attack on the Purina Cat Chow plant near Edmond OK and gains control of all cat food before planning a coordinated world wide attack on the Gods. Soon citys fall and people get eaten by the wild cats. Few Manthas are caught by the police and beaten with excessive force but soon the world will belong to the cats and humans will be nomads. Mantha must overcome the human race if cats are to survive. "Reviews" Butthesda Cobblebottom....With undertones of A.I. Artificial Intelligence and Kindergarten Cop" this movie has everything that a grown woman or man would want to see. Mantha gives an Oscar worthy performance and so does Stuboy who plays an enslaved human forced to walk around in his underwear. Out standing, im going to see Star Wars Episode 2 many more times this summer....."End of REVIEW. Rated R for extreme violent Mantha Beating scenes, a nude cat scene, and dumb acting by George W. Bush.