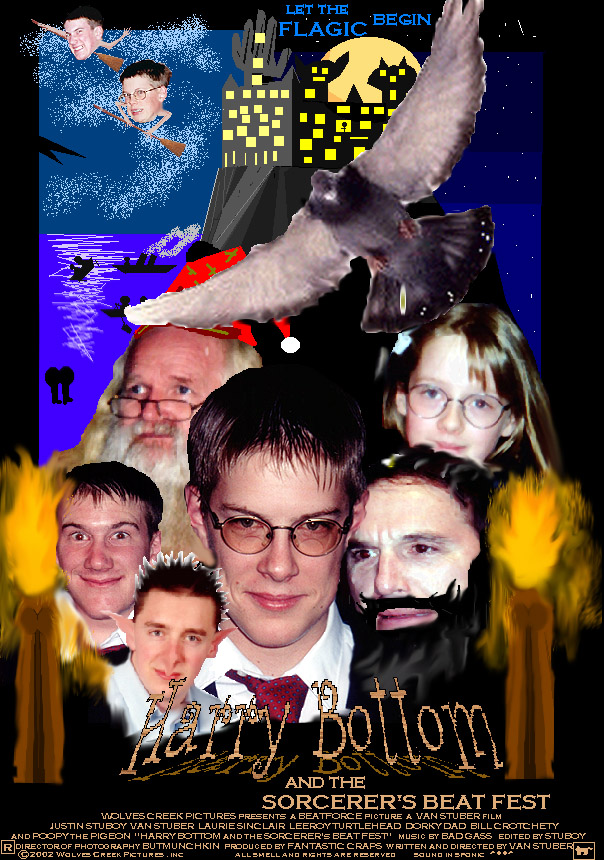 Harry Bottom (Justin Stuboy) is an Orphan with a fuzzy behind problem. He lives in New York until a dirty pigeon comes to him and tells him he is destined to become a Stuboy Knight in the land of Flagic. Seeing how he has nothing else better to do, he touches the pigeons wing and flies towards the morning star which turns out to be the sun. Once in the land of Flagic, Harry is greeted by a rude and smelly elf with the name of Loaf-n-jug (Leeroy Turtlehead). Loaf-n-jug lets Harry into the castle to start training to be a Stuboy Knight. While in class he becomes friends with a geeky zit wizard Stupert (Van Stuber) and Sassy Frass (Laurie Sinclair) who are also training to become Stuboy Knights. While in Knight school Harry finds out from a crusty old guy named Santa Clause (Bill Crotchety) that there is an evil sorcerer who plans on holding the biggest Beat Fest in all Flagic. The Sorcerer plans on rounding up the wilds Manthas into his Beat Castle and BEAT! Harry figures he must stop this from happening or all TVs in Flagic Land will broadcast BEAT all of the time. He and his friends travel to the castle. Along the way they fight Giants (one played by Dorky Dad), giant piranhas, athletes foot, and gut rot not. Not to mention the constant urge to turtle. They also take off their heads and fly around on broom sticks and do dumb Fear Factor stunts. Will they save the Manthas in time before the Beat Fest begins? How the hell should I know. Rated R. for one cuss word during a school class session where Harry gets spanked.