Your Only Stupid Once (Generic Bond 2) 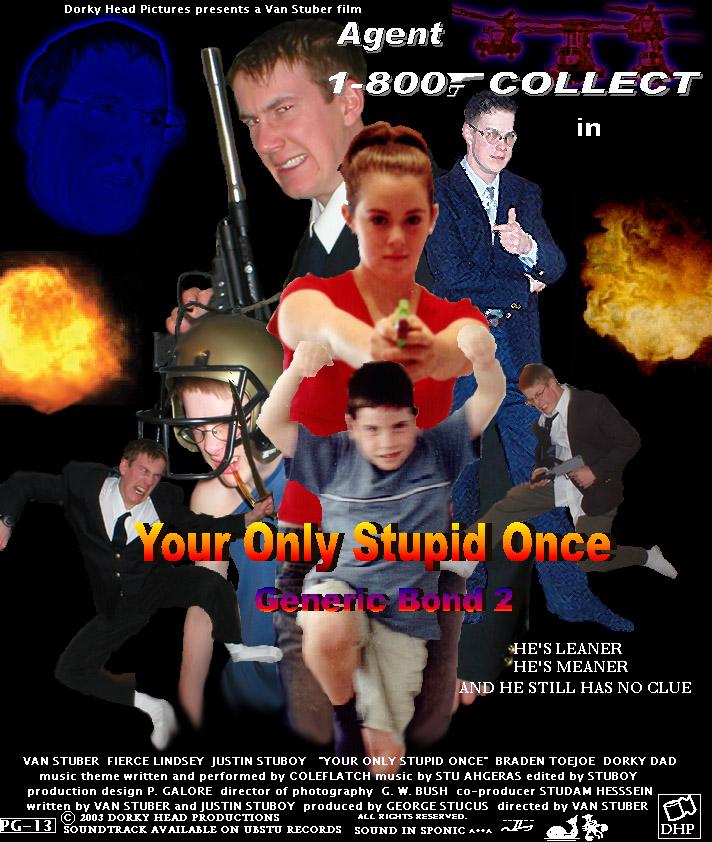 He's back and dumber than ever. Yes Generic Bond returns in this hilarious spoof, "Your Only Stupid Once" where a new batch of enemy's plan to take over the world. Led by the mysterious floating blue head named Gigastu (D.Dad), Slobber Man (Stuboy) and Toe Joe (Braden) plan to carry out orders that will make the world stupid by releasing a gas (mostly methane) into the upper atmosphere that will cause the people of the world to become stupid while Slobber Man and Toe Joe rob the Disney Vault and produce more copies of The Little Mermaid and Treasure Planet so they will always be available to the public. Seeing a potential disaster, the BEAT Agency of Montana dispatches its finest agents to stop Gigastu and his partners from committing the horrible crime. Agent 1-800 Collect, Generic Bond, (Stuber) and Agent 1-800 Call ATT, Regis Filboy, (Stuboy) are sent to California to protect the Disney Vault. Along the way they run into the seductive Ms Fierce (Fierce) who runs a Disney film destroying factory outside of Reno, Nevada. A fight begins between the Agents over who gets to take Fierce to a McDonalds restaurant first, but this quickly ends when they realize that Ms Fierce has been kidnapped by Slobber Man and held for ransom of 199,999 dollars. Now its up to the two agents to save the world from more Disney movies and Ms Fierse from the Slobber Machine designed by the Slobber Man. An even more ominous threat awaits when Saddam Hussien threatens to capture the ancient city of Ur if more Disney films are made. Time is running out for the agents, will they stop Gigastu in time, will the world be plagued by more badly animated Disney movies. How the hell should I know watch the move. Rated PG-13 for horrible acting from George W. Bush, a nude cat scene, and a some lude suggestions secretly hidden in some already existing Disney films.