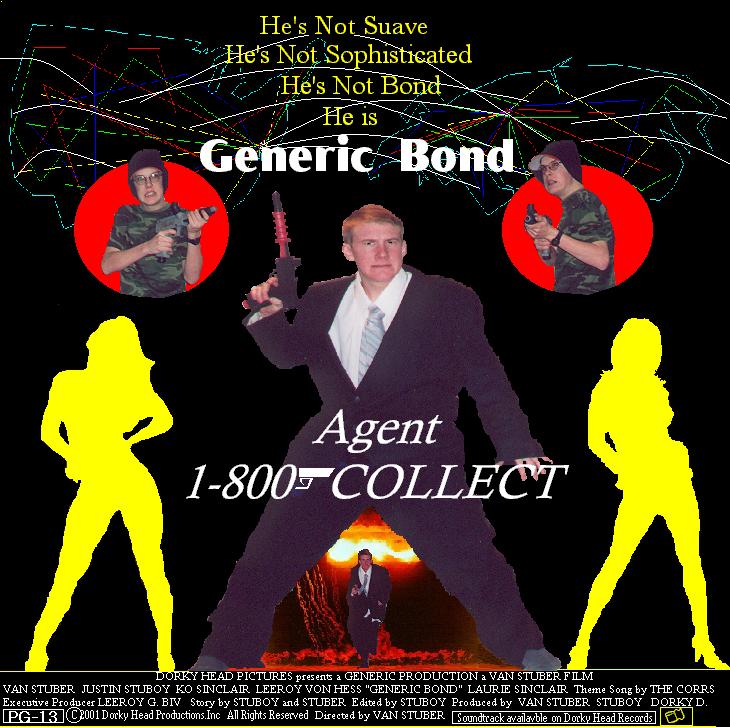 Yes, he is not suave, nor sophisticated. He isn't even Bond. But he is Generic Bond (Van Stuber) and yes that is his name. Always cheaper than the real thing, Agent 1-800-COLLECT is on a mission for his Mother country, the American Empire along with his partner, Agent 1-800-INFO (Justin Stuboy). While investigating a toxic Sewer Plant, Something goes wrong when a bunch of barrels are knocked off of these rafters by the evil Ethiopian Ramsais Stu De Vinci (Leeroy Von Hess). Suddenly Agent 1-800-INFO dissapears in the toxic barrels and Generic Bond is fired upon. So Generic escapes not knowing what happend to INFO. Along the way back to Butte Montanna, home of the BIA BEAT INFORMATION AGENCY. Generic meets a foxy lady named Virginia Sinclair (KO Sinclair). Generic, with his usual boyish charm, seduces Miss Sinclair and finds out that she is a KNOCK OUT. Well as the story progresses, Generic discovers that Agent 1-800-INFO is actually a bad guy and partners with Ramsais Stu De Vinci. Both evil guys are bent on making a sleeping gas that will make the world fall assleep while they rob all the banks over the internet and launch nukes at Russia just for the fun of it. Generic Bond stumbles on their plot and Virginia Sinclair is Kidnapped by De Vinci and held ransom for 2 dollars. Mean while 1-800-INFO sends Denise Richardson (Laurie Sinclair) to seduce Generic and keep him busy while INFO robs banks. Now it's up to Generic to save the world once again from the Hessian forces of Evil. Will he be able to do it in time before Butte Montanna gets destroyed. I just don't know. Rated PG-13 for Language, some PTing, and breif cat nudity. Copywrite 2001 Dorky Head Productions.