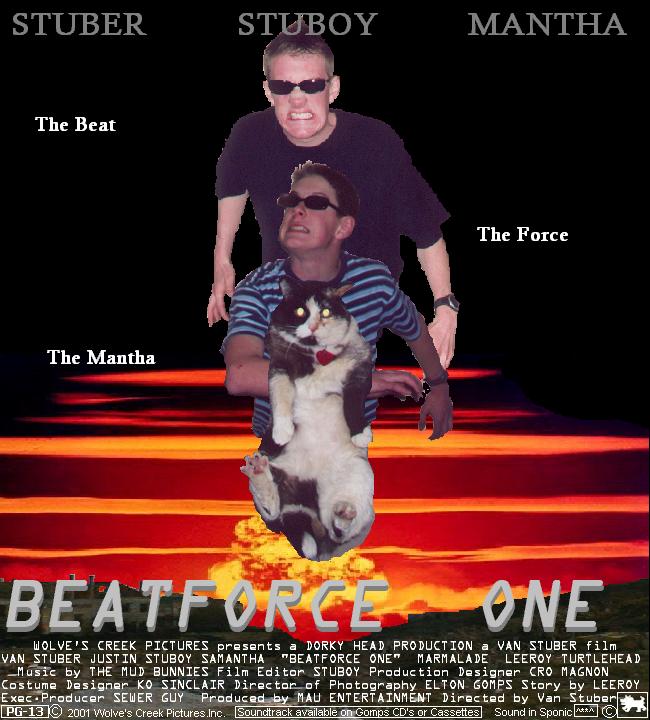 Terminator 2, Judgement Day and Airforce One. In the story, the future is over run with cats who's brains mysteriously grow bigger. These cats are now able to think like humans and build things like humans, and their leader is a brave cat named Mantha. After the Beat Wars in 1997, humans are pretty much nomads and live in the shadows of the great Cat empire. The war starts when Stu Net ( a dumb computer program)launches the first Nuke towards Russia. The Russian's launch back which pretty much destroys the whole world leading the Cats to populate and become the dominate, intelligent species. The Mantha of the future realizes that the Mantha of the past is in trouble because she remembers being chased by a Beat Force when she was a teenager. A Beatforce is a Mechanical Robot Human that is built piss poorly and always malfunctions. It's only function is to capture the Mantha and beat it to prevent the Humans from being overrun by cats in the future. The first model, Beatforce One, (Stuber) Is sent back in time, by the Human Resistance leader John Shlonger (Stuboy), to beat the Mantha and save the humans. The Beatforce One is sent through a time warp Butt Naked and ends up on an Air plane with a bunch of cats who happen to look like Mantha. The Plane becomes a Beat Fest and crashes into a neighborhood in Los Angeles causing the Beat Force to screw up through the rest of the movie. William H. Musty (Leeroy Turtlehead) plays the enslaved stewardess on the plane and eventually joins forces with the Beatforce One to track down the Mantha that is being protected by a Robotic Cat from the Future played by Marmalade. I don't want to give the story away but expect a thrill ride from the future. "Beatforce One"....The Beat.....The Force.....The Mantha.....Rated PG-13 for language, brief nudity, and plenty of Mantha beating Scenes.