Carlson Hall on the U of U campus, and The SLC Cemetery.

Salt Lake City Utah, and the University of Utah campus. 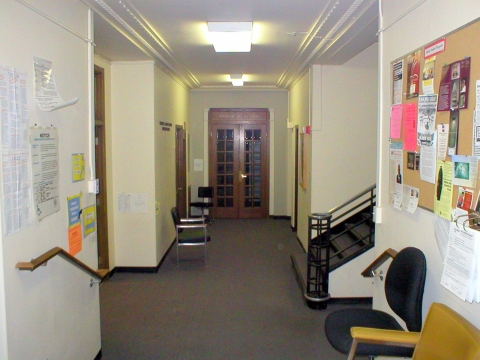 We at IMPS like to look at the rational side of things. There is usually an explanation for almost everything we experience during our ghost hunts. Orbs, as in the one seen in the picture above, in our eyes, are likely just particles of dust in the air, reflecting off the flash of the camera. This picture was the first taken on our investigation.

Carlson Hall used to be the Women's Dormitory when the campus was much younger. It was used as the women's dorm all the way up until the 1960s and 70s when the newer dorms were built more to the east on campus. It is reported by numerous sources, most predominantly an article from the Daily Utah Chronicle that in the late 1930s, specifically 1938, a young woman committed suicide in this building, and has caused a haunting problem ever since. According to the article, the spirit of the woman is to blame for the elevator malfunctioning, however, as you'll soon learn, this may not be so.

This first picture above was taken on the main floor of the building, looking towards the auditorium in the building, which unfortunately was locked when I visited.

On this particular investigation, the equipment in use at all times was the Sony Video Camera, the Olympus Digital Picture camera, which took these pictures, an Olympus Digital Audio Recorder, and a CellSensor EMF meter. The EMF meter saw its first usage on this trip, and produced some interesting hits we'll discuss in a little bit. 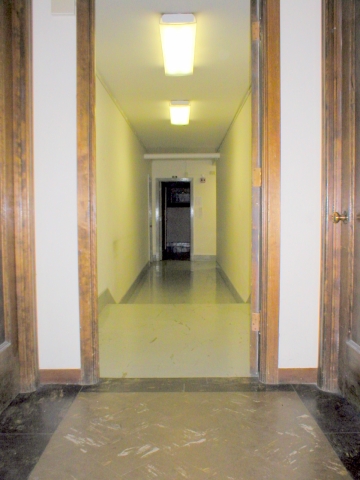 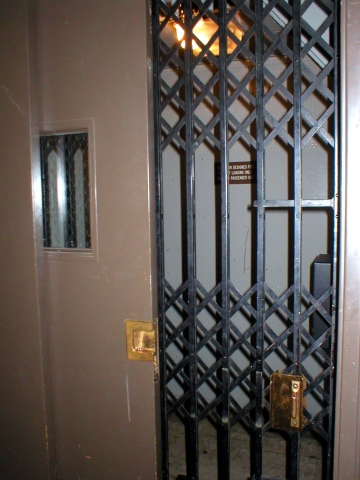 The picture at left was taken in the basement of the hall, looking toward the north. In the center of the picture, a very old men's bathroom contains a very noisy ventilation system that was picked up easily on my recorder. There was a grad student working in one of the rooms off to the right, so I didn't stay down there too long. I did however, run into the fated elevator, which you can see directly left.

The elevator malfunctioning is thought to be caused by the ghost of the woman who committed suicide in this building, however when I tested it several times, it wasn't working to begin with. I started testing the elevator on the first floor and had to hold the button down for quite awhile, all for absolutely nothing. The elevator did not come down to the first floor, but instead stayed on the second floor, as is seen in the picture above. I tried several times to call the elevator to the basement but it just wouldn't come down. Once on the second floor, there was no way you would catch me inside this elevator if it wasn't working to begin with. I did open the door and stand inside for a few seconds, but could not detect anything and the EMF meter was flat. 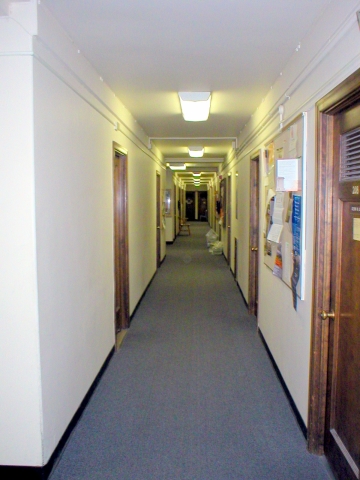 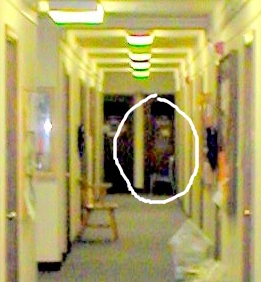 On the third floor, things were a little different. Out of the entire building, the third floor seems to be the most mysterious. It looks almost exactly like the second floor, however the activity seemed to actually be present. During the entire investigation, the tape recorder and video camera were rolling simultaneously, and both were in relative proximity to each other. Audio from the camera failed to record the EVPs below heard clearly on the Digital Recorder. The third floor is where the EMF meter experienced some spikes. In one spot, exactly where the picture at left was taken, the meter held steady and spiked twice. The video camera recorded the meter spiking. Checking the video footage, nothing like what is seen in the door is present. There is nothing on the door but a few signs, not a stretched out piece of material.

The papers you see at right in the picture to the left were moving whenever the meter would spike but it was later found that the building was drafty and during the investigation, I could hear wind rolling through the building. The woooh, kind of wind. To the untrained eye, the picture at left looks absolutely normal, however on closer inspection, something eerie appears by the far door directly in the center of the picture. The version of the picture at above left  is the master, fixed by Picasa. The enlarged section of the door (above right) contains what looks to be the outline of a body and a clear face looking straight at the camera.

In alphabetical order, here are the EVPs recorded during the investigation, with info and possible explanations. They are all in .mp3 format. EVPs were cleaned and duplicated in Cool Edit. The duplicated versions were then fixed with the highest hiss reduction plug-in.

Far Off Talking - Recorded on either the basement level or the second floor, what sounds like far off talking directly after you can hear me talking. The talking, or whatever it is, seems to fade in the distance. There was a male grad student in the basement but nobody else in the building. I did not hear any talking during the entire investigation.

Scream - Recorded on the third floor. This clip did not contain any talking by me prior to the sound. The clip has been duplicated and cleaned.

Right after doing the Carlson Hall investigation, I headed up to the Salt Lake Cemetery and began an investigation on the far northeast side of the area.
I immediately noticed several people huddling around one grave to the east of me, and noticed they had children with them too. They were putting flowers on a few graves in a particular area. I did not talk to them but they did know I was there. I began the investigation walking into the main part of the cemetery, first heading west, then south. I took several pictures, and noticed right away the heavy dust content in the air. When I took pictures, I could actually see the particles light up. This proves that orbs are nothing more than dust, that is unless they are captured on video, and move in odd directions, that or they are an odd color.

The picture below is full of orbs, but nothing relevant to ghosts was detected this evening. The meter did spike several times but was dismissed as energy from either the video camera itself or created by my own body. Everyone gives off EMF, and with a meter like mine, your EMF can be detected. Several strange noises did occur while walking through this part of the cemetery, but they too were dismissed as wind created. I left after about 15 minutes, as I did not want to disturb the people laying flowers on the graves. Although audio and video were recorded at the cemetery, no significant finds were obtained from this visit. The north side of the cemetery seems a lot more peaceful than the south side. This could be why the south appears to be more active. 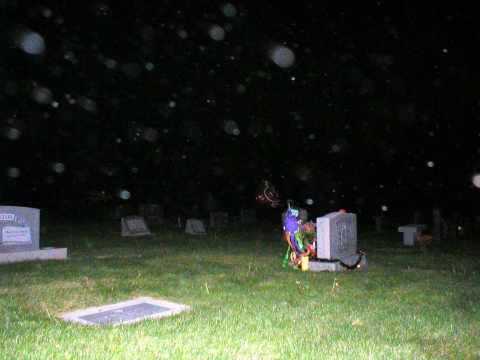 All EVPs and images above are property of the IMPS (Inter-Mountain Paranormal Society). Do not use without written permission from us. If you are interested in using our EVPs or images, please email marsam233ATyahoo.com. Replace AT with @ in your mail program.